As the latest model in the Typhoon series by Yuneec, the Typhoon H could finally be the drone that gives the enormously popular DJI Phantom series a run for its money. 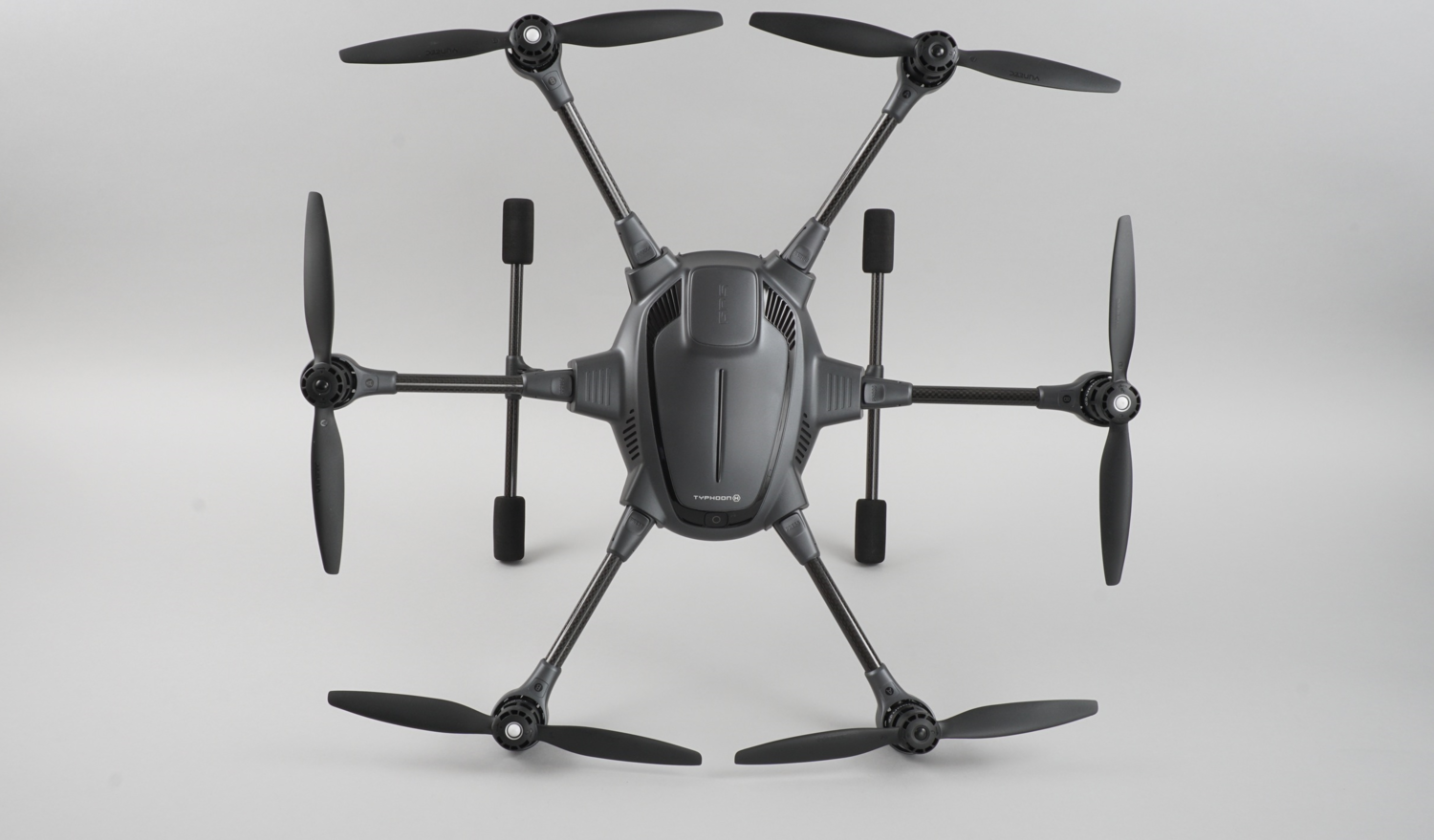 The Typhoon H is a hexacopter designed with 6 rotors to make flying smoother, steadier, and safer in the air. The drone features a camera that can turn 360 degrees, a big bonus for filmmakers looking to capture an attention grabbing shot. The landing gear on the Typhoon H is also designed to retract so that it won't potentially show up in any footage. Finally, the drone boasts a wide range of autonomous flight features including Orbit Me, Point of Interest, Follow Me, Curved Cable Cam, Dynamic Return to Home, and Journey.

With all of its advantageous features at just $1,754.00 CAN, the Typhoon H is a big step up for Yuneec and may finally be the drone that levels the DJI dominated playing field. 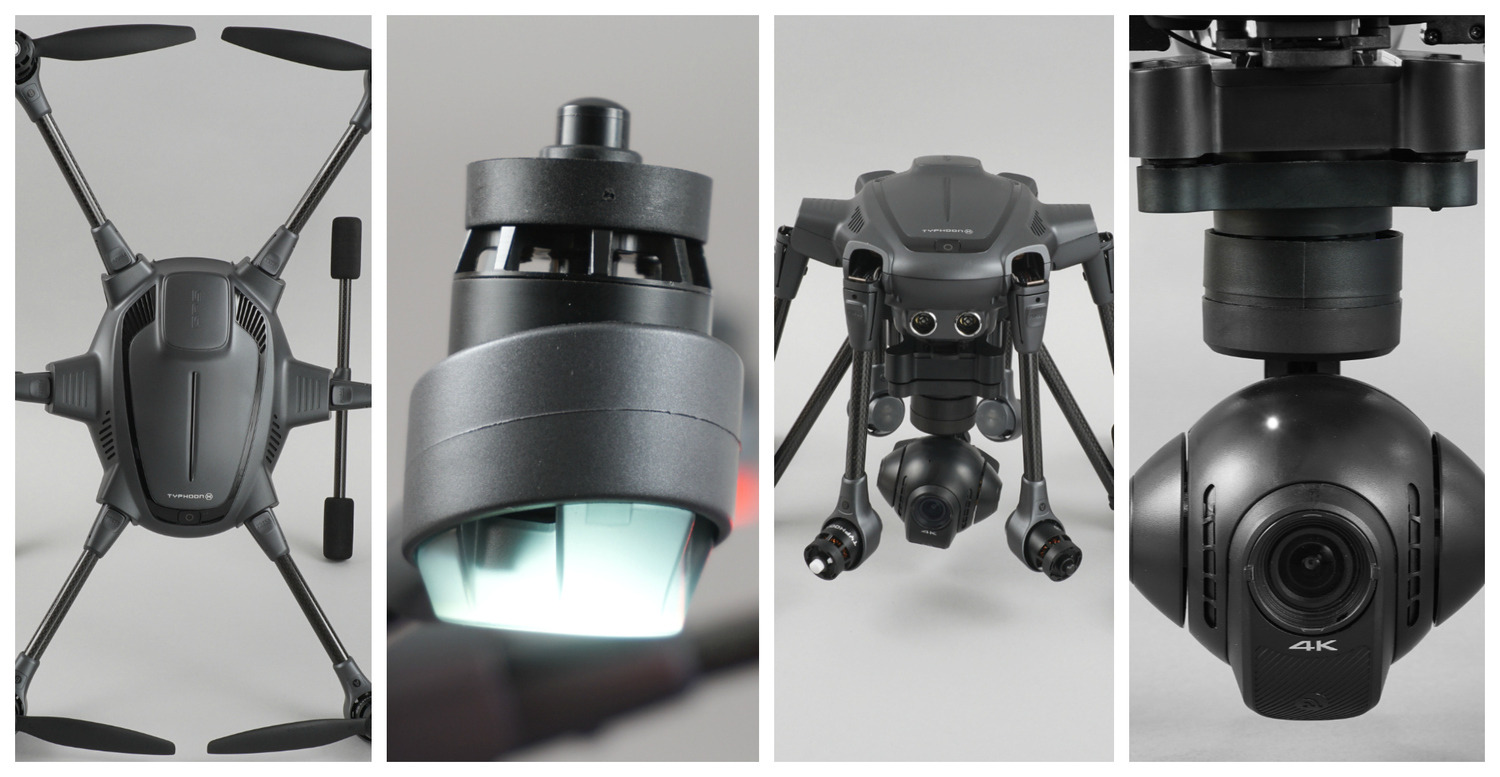 Overall, the grey and black Typhoon H has a very industrial look. The drone is made with a solid plastic body and carbon fibre arms which help to keep the drone lightweight and stiff while in the air. The propellers also use a quick disconnect system to easily allow the user to attach and detach their props. 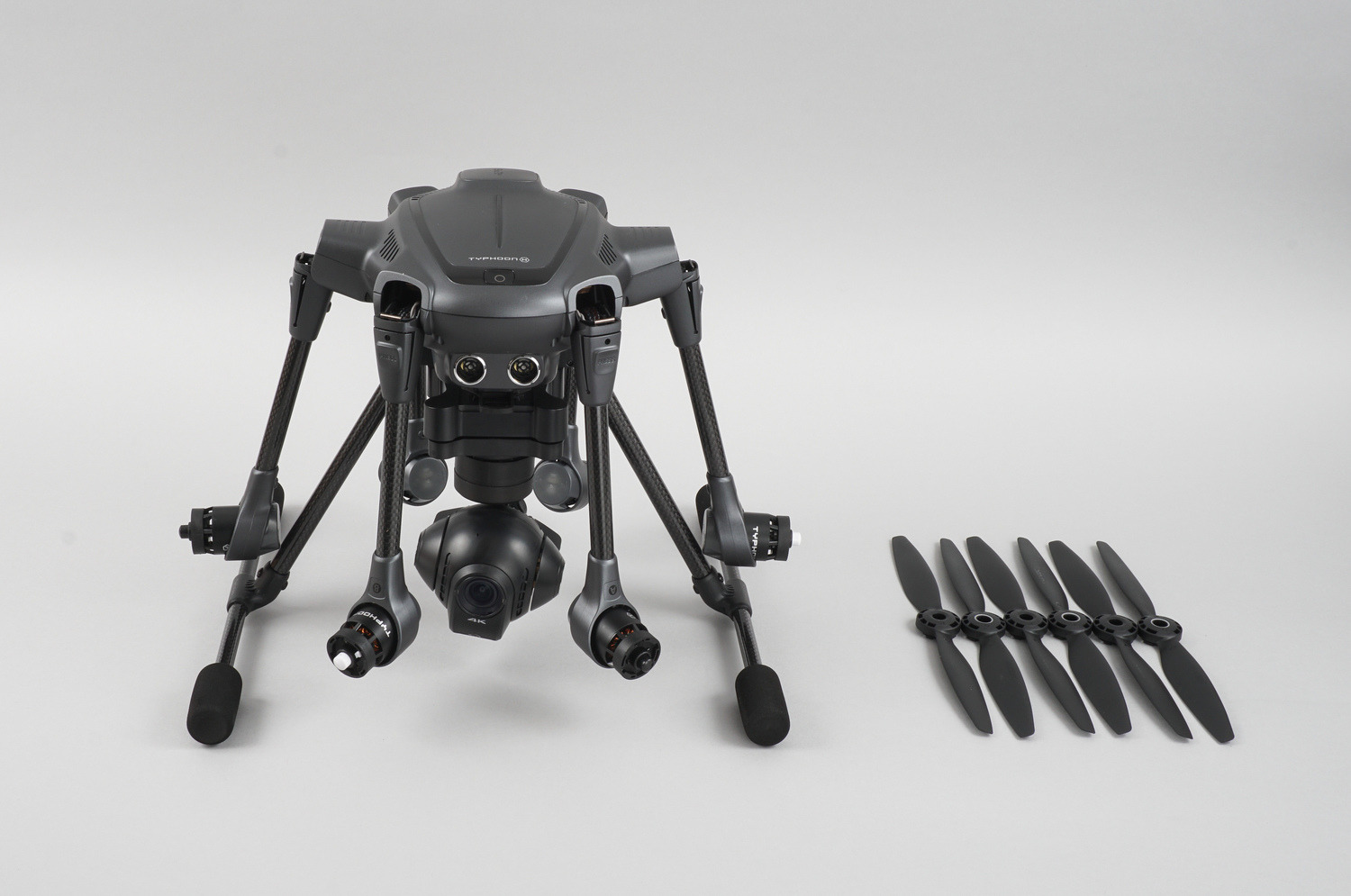 The six rotors on the Typhoon H are a huge highlight of its design. The rotors work to make the Typhoon H quieter and smoother while in flight. The six rotors provide a huge safety advantage as well, as the drone can automatically adjust and operate in the air if a rotor fails.

The Typhoon H can fly up to 35 kilometres per hour and reach a height of up to 1.6 kilometres. The Typhoon H is also extremely stable and quiet in the air. Furthermore, the drone can make extremely smooth turns while in flight, which is a huge bonus for those who want to use the drone for primarily video production purposes.

The centrepiece of the Typhoon H's remote controller is the high resolution 7' built-in touchscreen. The screen is easily viewable in direct sunlight, although the interface isn't as user-friendly, organized, or as streamlined as the Apple-like DJI Phantom series. 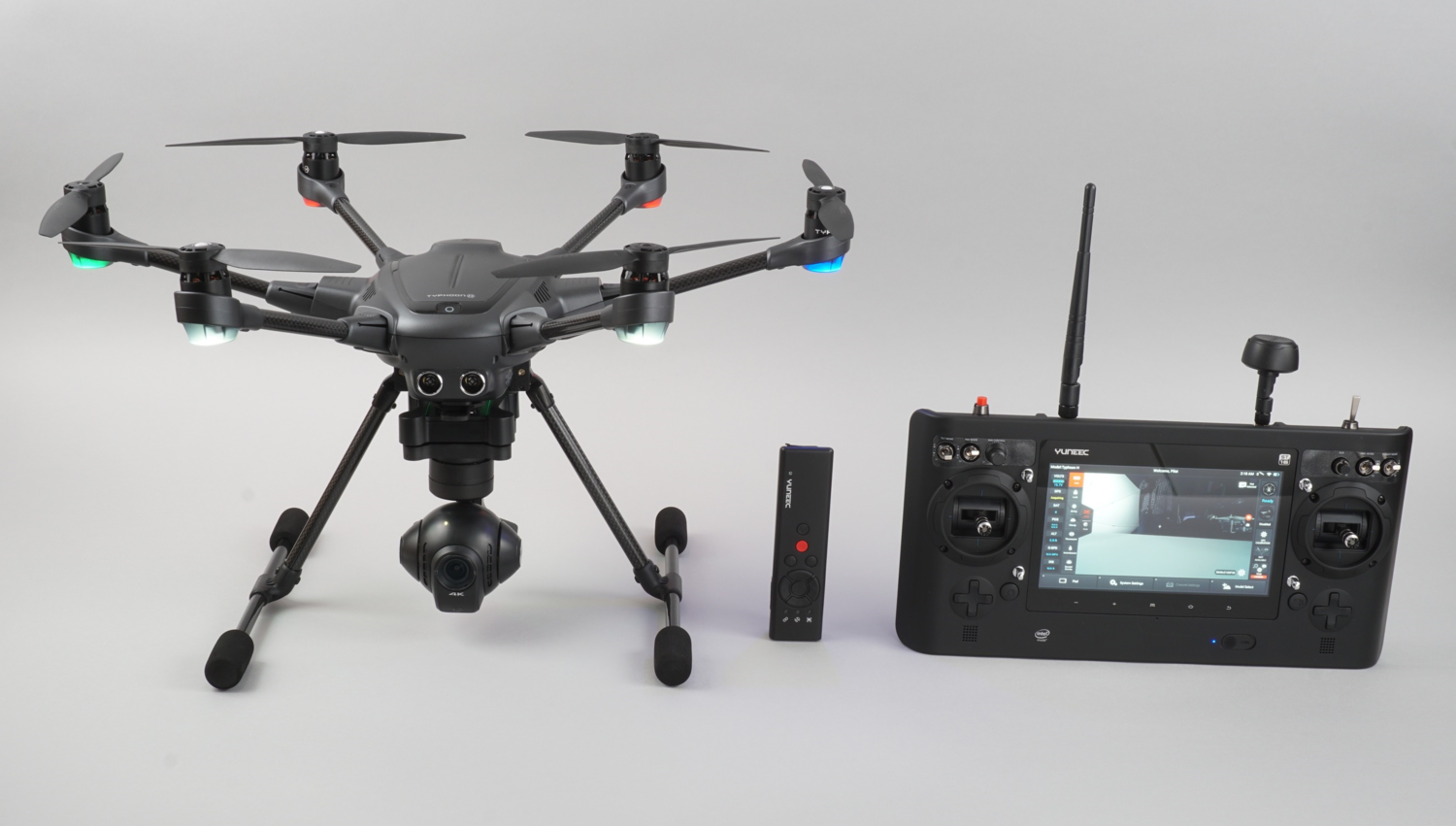 The Typhoon H can function with two operators. The ability to connect to more than one controller and use the secondary Wizard controller to take-off, fly, and land the drone is a great option for filmmakers and casual users alike. One person can solely focus on the flying as the other focuses on the shooting. The Wizard controller works well, though operating it can potentially be a big learning curve for a beginner. As the Wizard is designed with buttons instead of traditional sticks, users may feel like they don't have as much control.

The Typhoon H is a great choice for pilots who want to use their drone primarily for shooting. The Typhoon H uses a 12 megapixel 4K camera that can turn 360 degrees. The 3-axis CGO3+ gimbal is steady and when turning the camera, footage is smooth and stable. The drone even has a mode where the camera can continuously spin while capturing footage for filmmakers looking to capture unique shots. 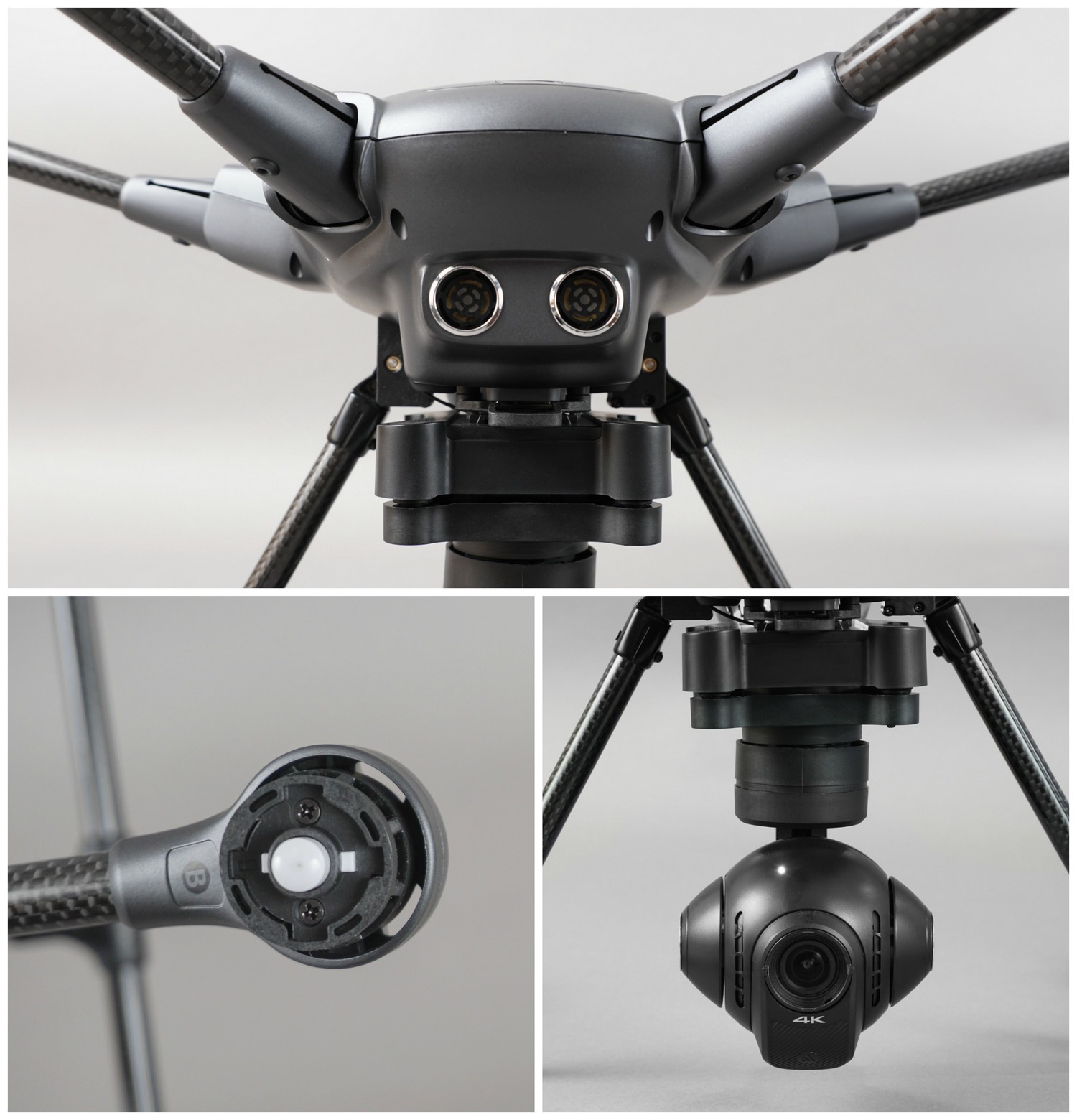 The Typhoon H comes with 6 intelligent flight modes. Each flight mode performs as described, but the instructions on how to run them are not as clear as the Phantom series.

In Orbit Me, the drone can fly in a circle around the user. One thing to note is that if the user is moving in a circle with objects around, the drone could potentially collide into the obstacles within the perimeter of the circle. In Point of Interest, the operator can have the Typhoon H orbit around an object autonomously. The intelligent flight mode Journey functions as a kind of aerial selfie capturer. Users can make their drone fly in and away from them up to 150 feet. In Follow Me mode, the Typhoon H can follow along with the pilot as they move around. With Curve Cable Cam, pilots can program an invisible route for their drone to follow. Finally, in Dynamic Return to Home mode, operators can have the drone land within 26 feet of wherever they are. 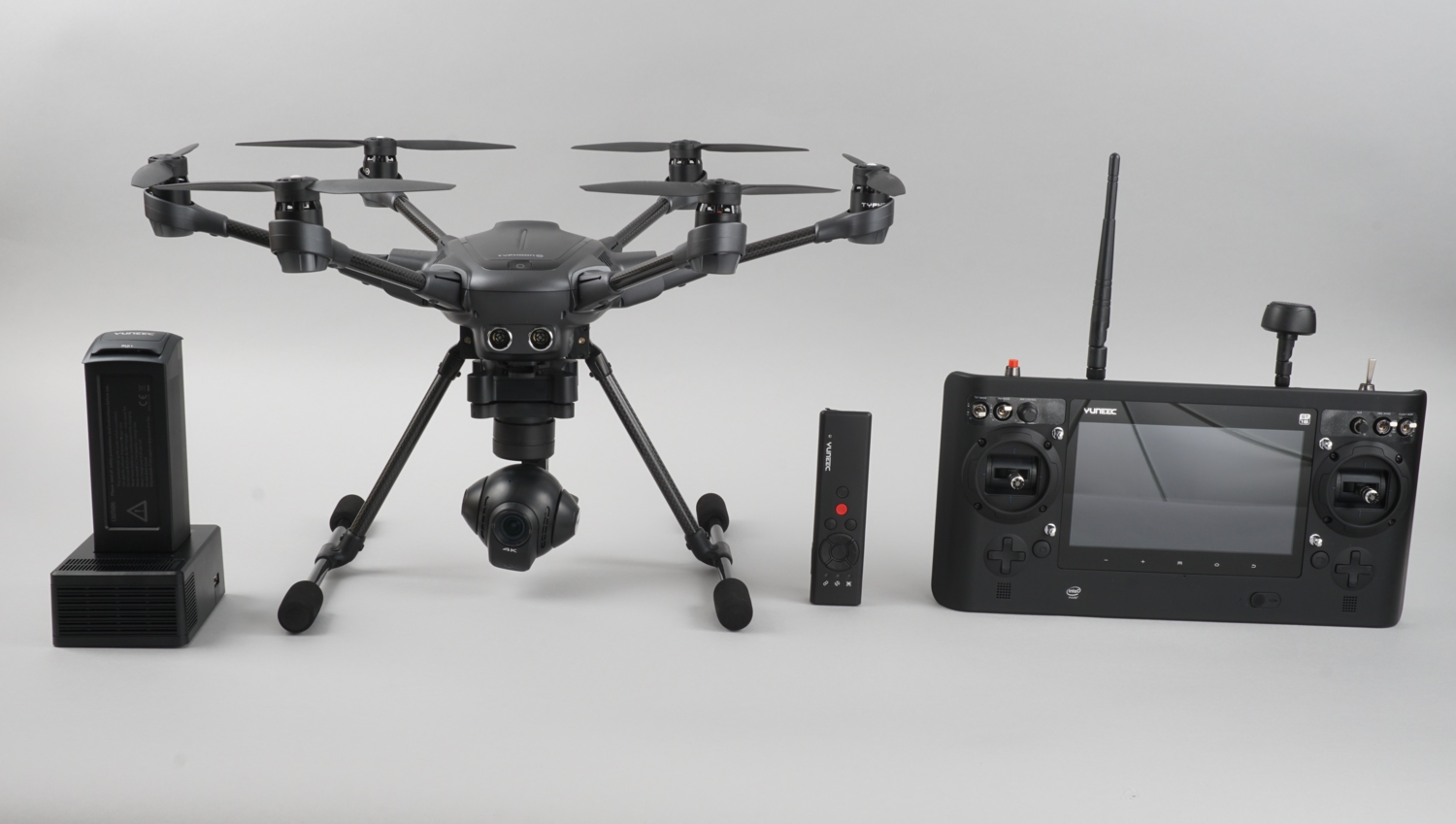 The Typhoon H functions as a two operator system and includes a remote controller, the secondary Wizard remote controller, a charger, a battery, and 10 propellers. The downside is that the package does not come with a case, however the purchaser does not need to buy a tablet since the controller comes with the built-in touchscreen. Another economical bonus is that the package comes with the team mode option, as well as the secondary controller. 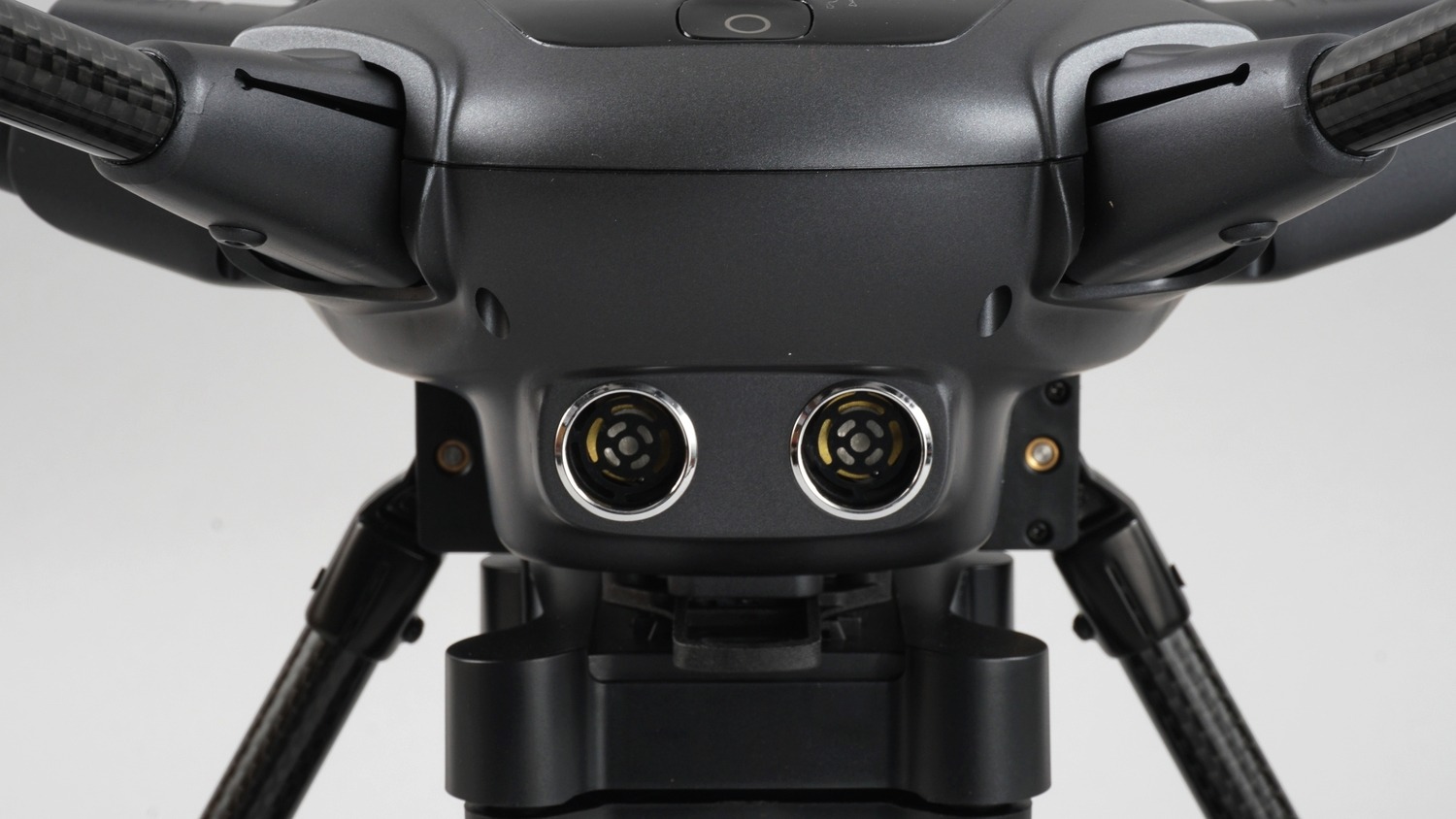 When it comes to avoiding collisions, the Typhoon H is equipped with a built-in obstacle avoidance system that uses front-facing ultrasonic sensors to avoid objects in its path. The two sonar sensors on the front of the drone work well at detecting obstacles, and can even avoid objects in the dark. When tested, as the drone was flying straight towards a goal post, the drone successfully detected the obstacle and avoided a collision.

In the future, Yuneec is also planning to release a high performance obstacle avoidance system in partnership with Intel, called RealSense. The RealSense system will be able to intelligently avoid and navigate itself around obstacles, as well as build a 3D model of its environment.

For the very first time the Phantom 4 has finally found a worthy competitor in the Typhoon H. The Typhoon H's six rotors, retractable landing gear, 360 degree turning camera, and team mode option, make it one of the rare drones that can truly rival the DJI Phantom series that has thus far dominated the playing field. 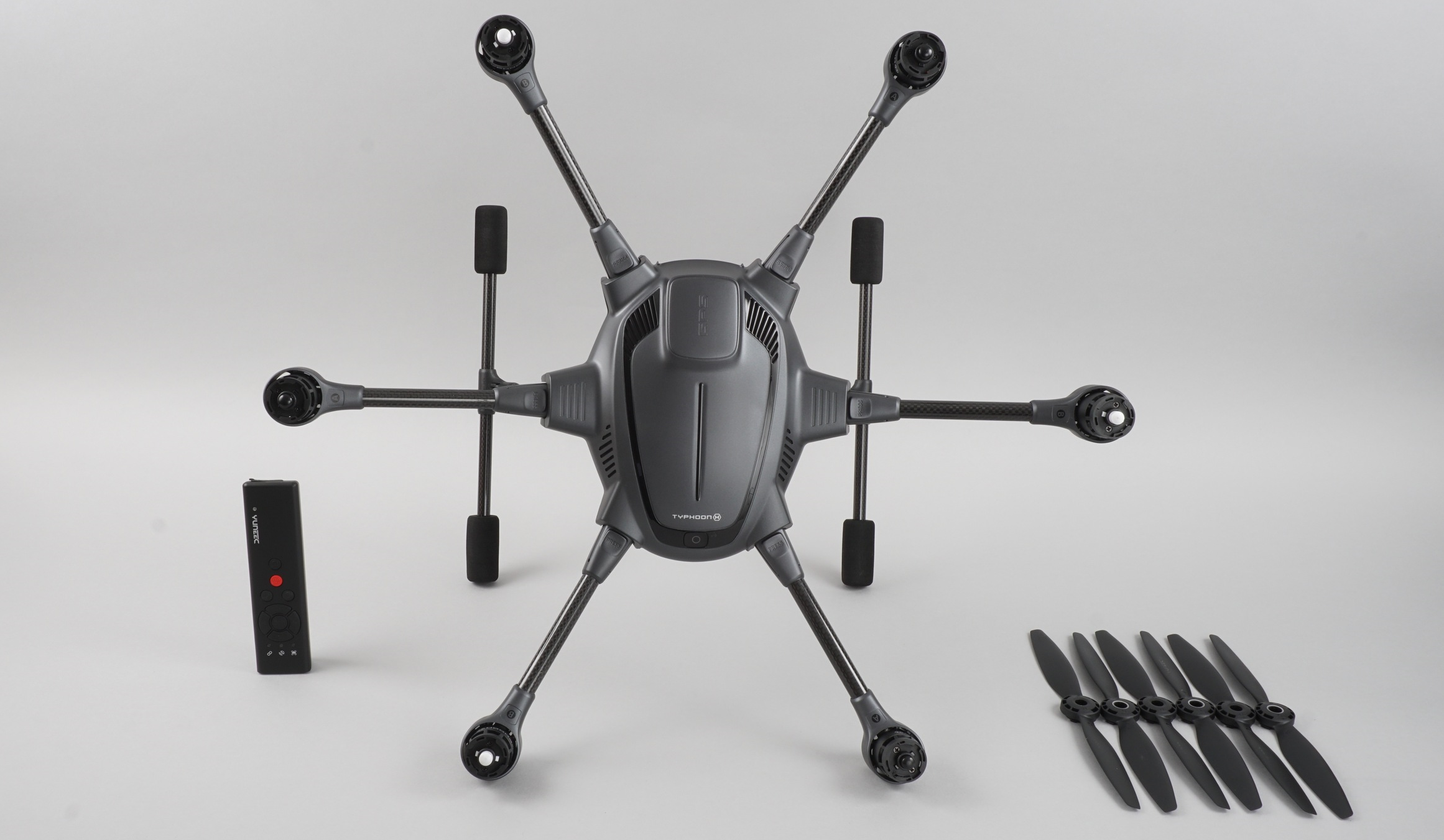 The Typhoon H's hexa-rotor design provides flyers with better stability and control in the sky while also significantly increasing safety if a motor fails. The retractable landing gear ensures that the legs won't obstruct footage, especially when using the 360 degree camera. The autonomous flight features work great, and design-wise the Typhoon H is durable, lightweight, and sturdy. Lastly, the remote controller with a built-in touchscreen and secondary Wizard remote is a big bonus when it comes to the Typhoon H's overall package.

Though the Yuneec's last few releases didn't come close to competing with the DJI Phantom series, the Typhoon H is a drone that can finally fly in the same arena. Just last year, technology giant Intel invested a colossal $60 million into Yuneec, showcasing just how much potential Yuneec has to release a future drone that could usurp DJI's throne. Their next release could finally be the drone that soars past the competition.