Combining state-of-the-art design and engineering, the newly released DJI Mavic Air is poised to become the ideal aerial companion for drone enthusiasts of all levels. Featuring an ultra-compact design, upgraded 4k 12-megapixel camera, enhanced front and rear-facing obstacle avoidance system, and all of DJI's most advanced flight technology, the DJI Mavic Air is a revolutionary new addition to the consumer drone market that will enable any UAV pilot to take their aerial endeavors to all new heights. 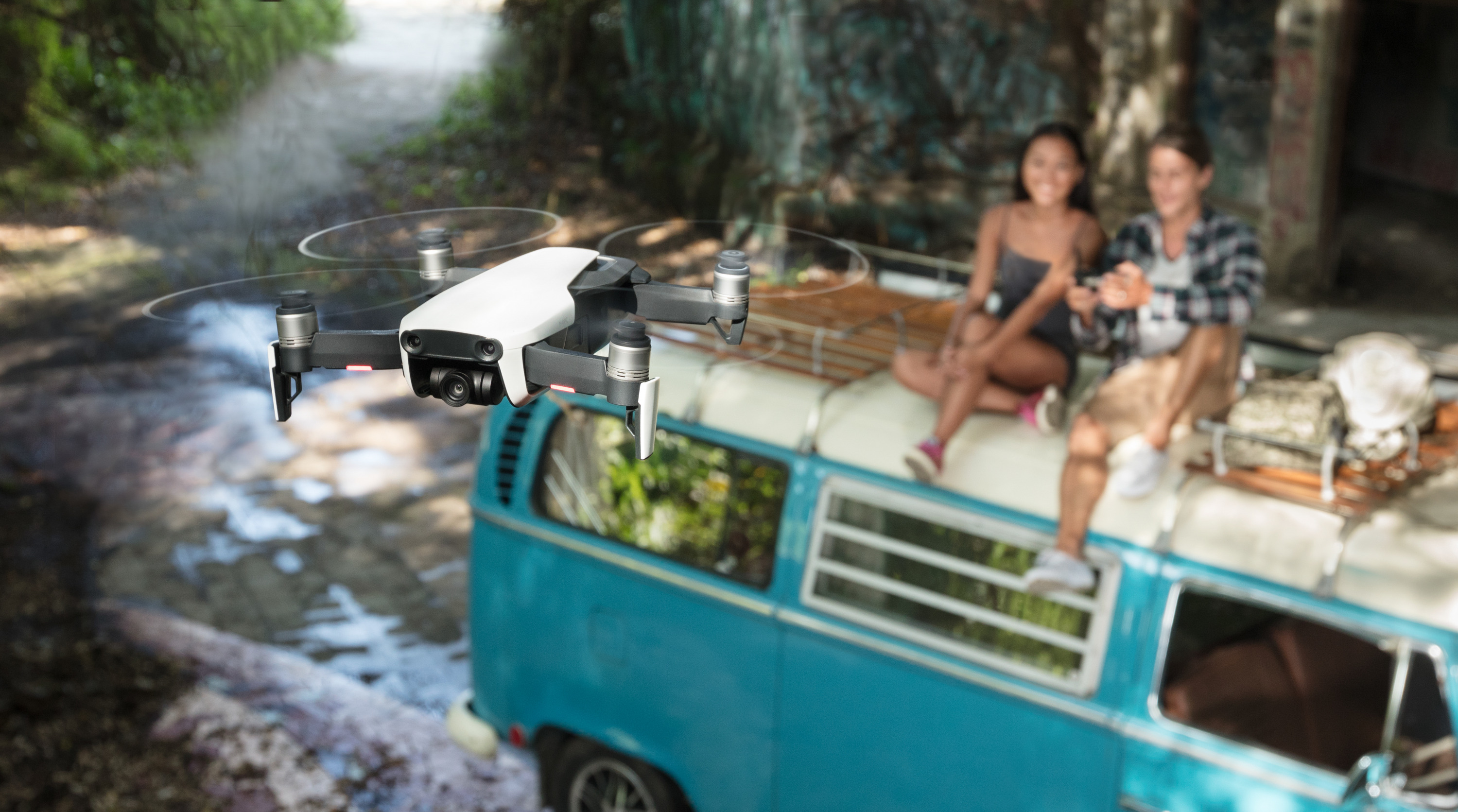 Preceding the release of the innovative Mavic Air, the DJI Phantom line up paved the way for DJI to dominate the consumer drone market thanks to a combination of advanced flight technology, user-friendly controls, and price point. However, a shortcoming of the Phantom series was how inconvenient the drones were to store and transport. DJI responded to this problem with the release of the DJI Mavic Pro, a foldable, portable drone that was roughly the size of a water bottle and specifically designed to be as compact and easy to transport as possible. 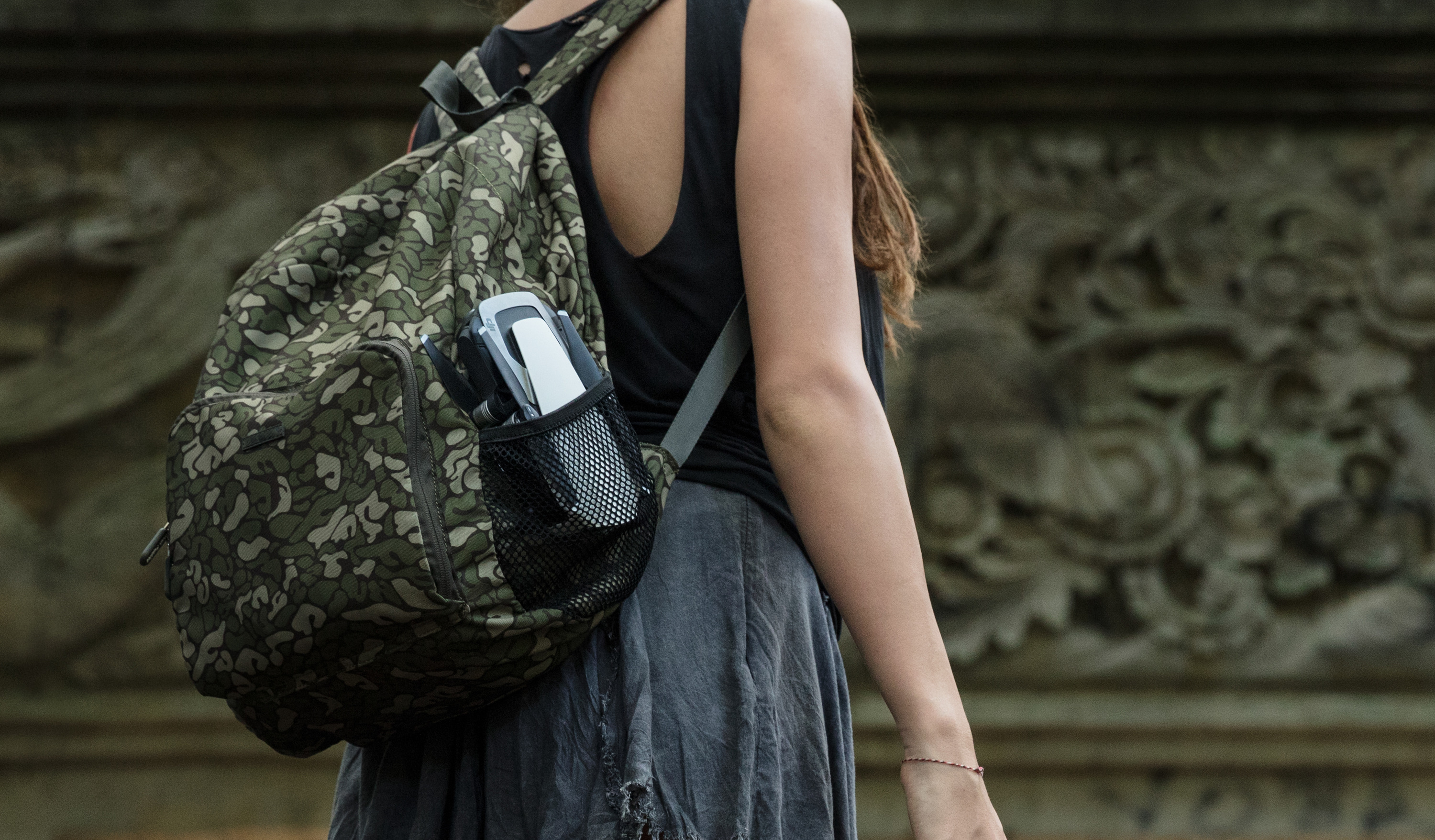 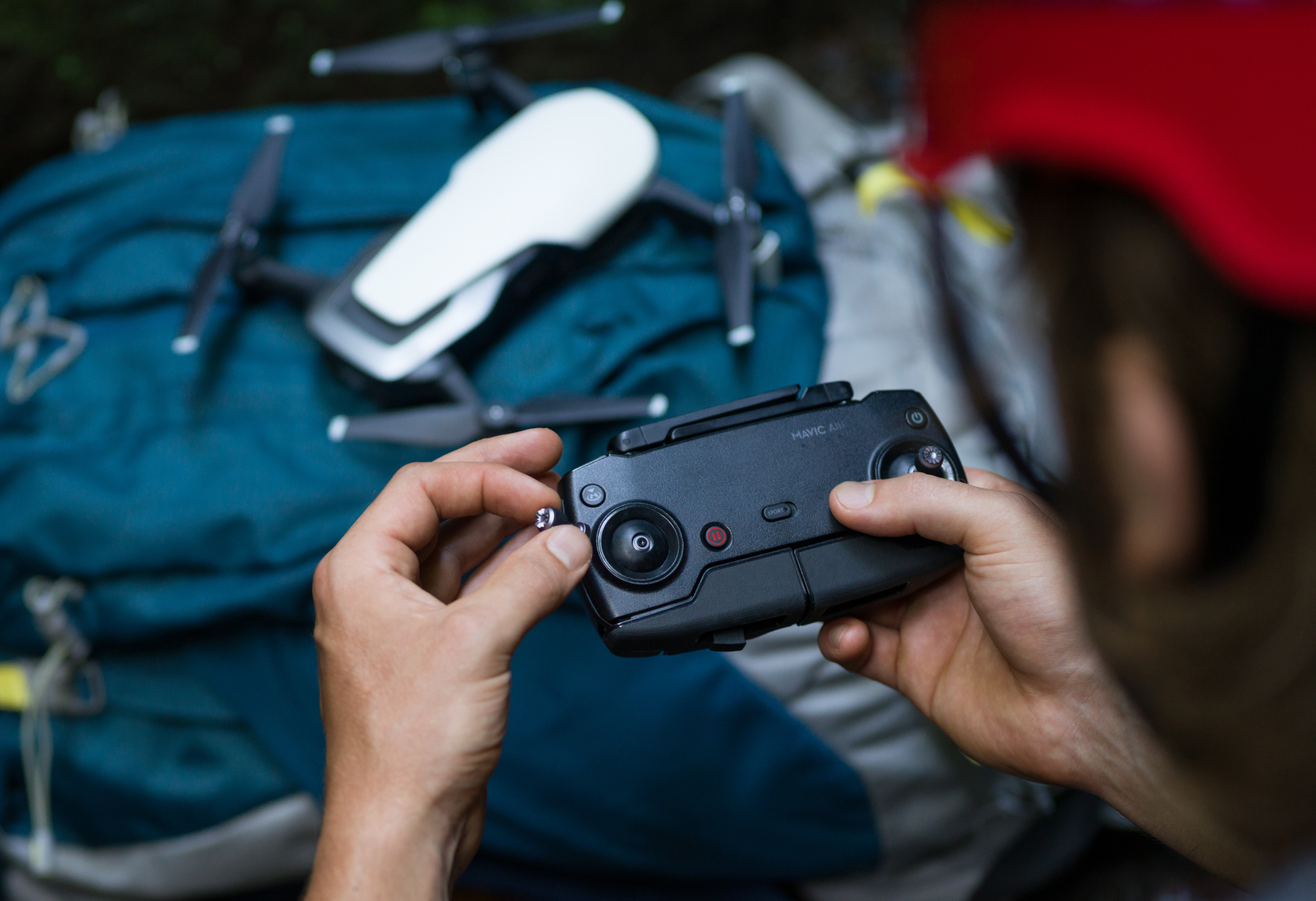 The DJI Mavic Air released just this month, is made to be the drone that bridges the gap between the Mavic Pro and the Spark, combining all the powerful flight technology DJI has become known for, on top of an ultra-compact design so that users never again have to miss an opportunity to capture the perfect aerial shot. The brand new Mavic Air, features an upgraded obstacle avoidance system in comparison to both the Spark and Mavic Pro, along with a powerful 3-Axis 4K 12-megapixel camera system, so that drone enthusiasts of all levels can have a drone ready in their back pocket whenever and wherever aerial inspiration strikes. 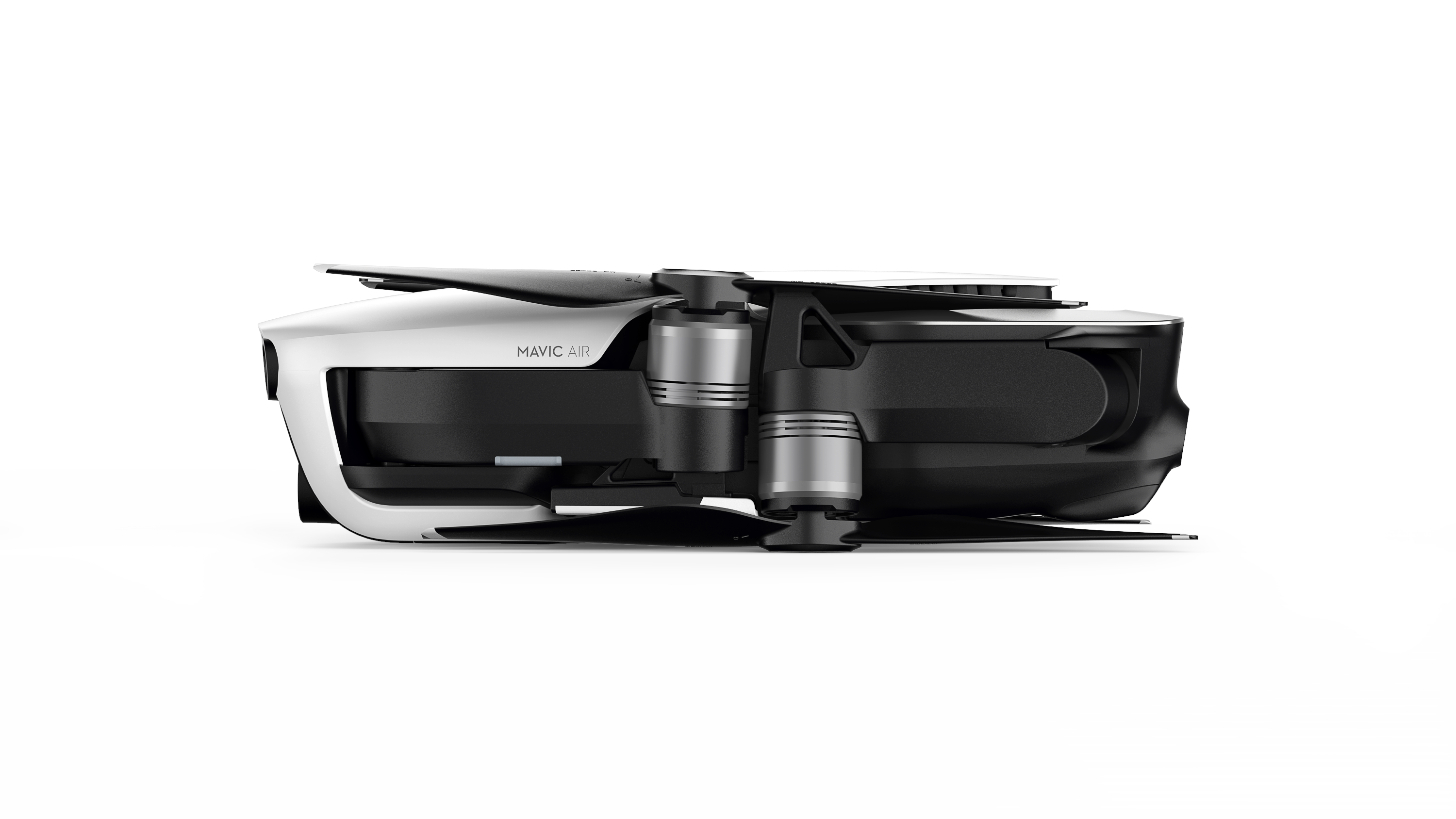 There were no shortcuts made in the design of the Mavic Air. Once again proving their dedication and attention to detail, DJI designed the Mavic Air with a visually striking, industrial look, reminicent of an exotic-sports car. In your hands, the drone feels extremely high quality and lacks the cheap, plastic-like feel some other drones on the market can have. Overall, the design of the Mavic Air is both visually impressive, innovative, and practical, with all the design features perfectly thought out to ultimately create a drone that is powerful yet compact enough to fit in the back of your pocket.

The Mavic Air inherits the same foldable design featured on the now infamous Mavic Pro. Both the arms and legs of the Mavic Air fold flush against the drone's body. When completely folded down, the Mavic Air is roughly the size of a Smartphone. The drone itself weighs in at just 430 grams, and though small and lightweight, the Mavic Air actually exceeds the power and flight features of any drone of its size currently available on the market. Showcasing DJI's attention to detail, the Mavic Air's front arms feature small feet that can extend and lift the drone approximately an inch off of the ground. The tiny extended front legs can fold inward for added compatibility when storing and transporting the drone, once again displaying DJI's dedication to little design details that enhance the overall user experience.

One of the flaws of the Mavic Pro was its vulnerable gimbal and camera unit. Due to the sheer size and the position of the gimbal/camera system of the Mavic Pro, the unit was more exposed to potential damage and environmental conditions. On the new Mavic Air, DJI recessed the camera into the body of the drone for added protection of the gimbal and camera. On top of this key design improvement, the Mavic Air has been built with seven onboard cameras that are reinforced with magnesium alloy brackets and rear vents that help to dissipate heat. 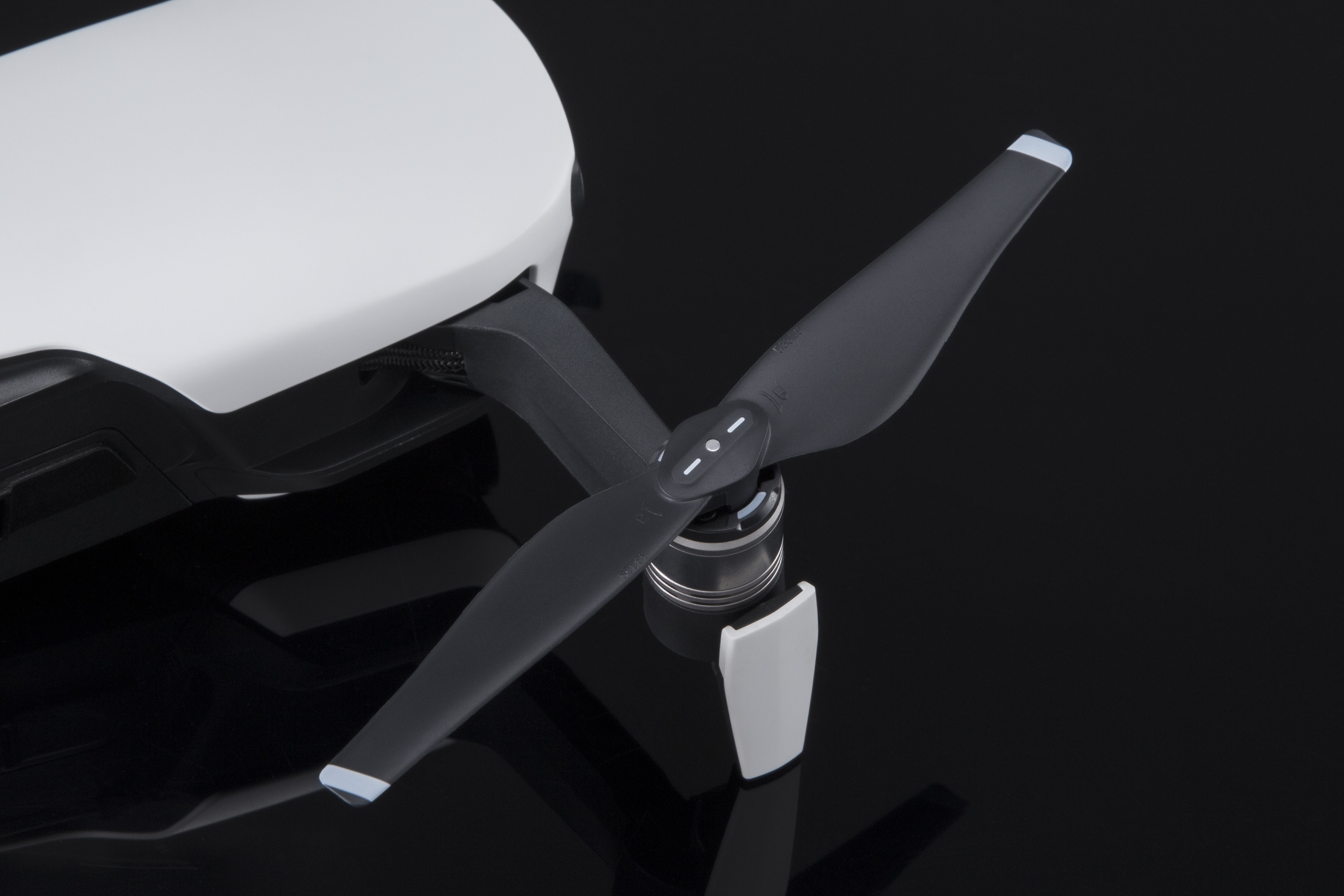 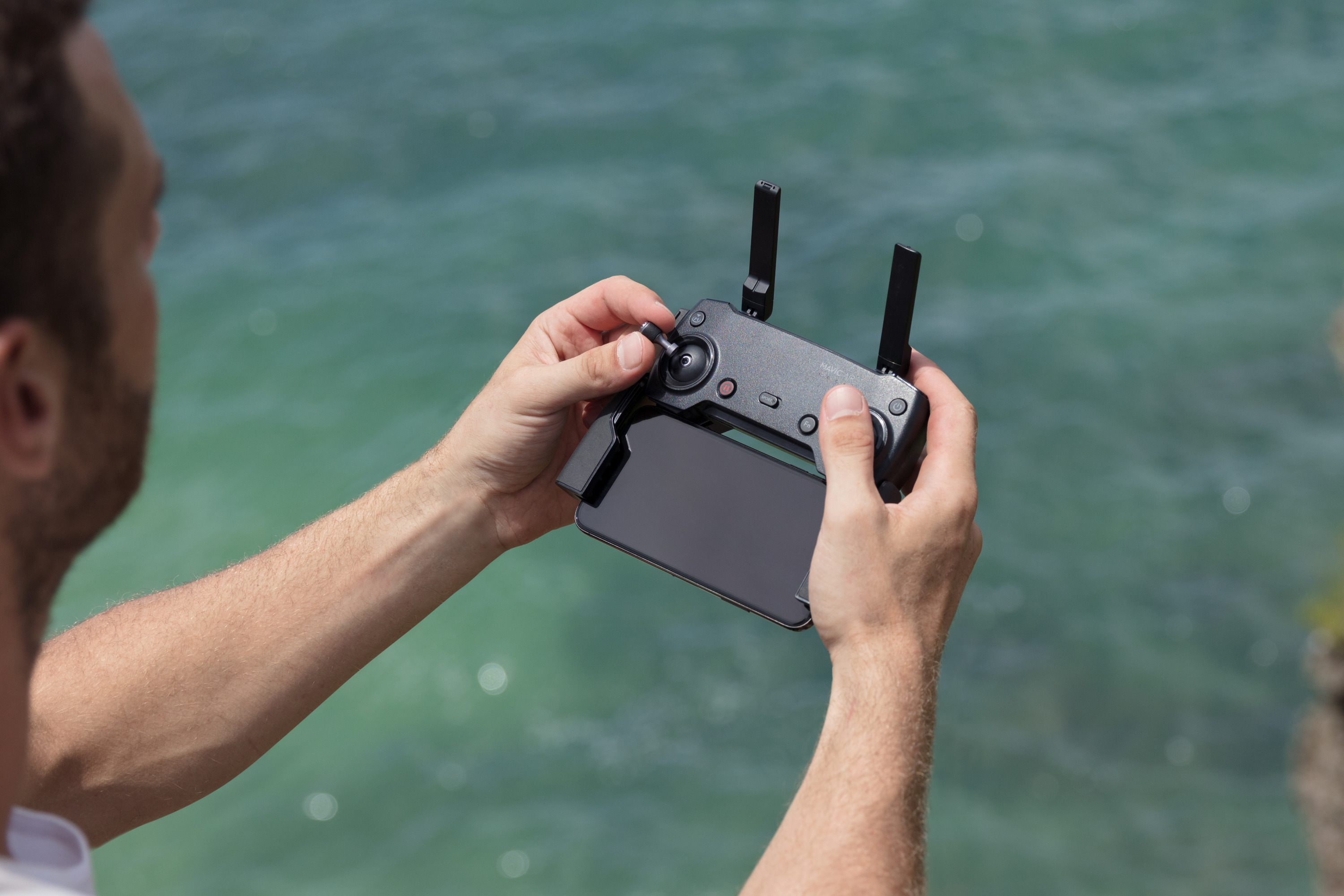 The Mavic Air comes with a remote that is as compact and as the drone itself. The remote features control sticks that can be removed and stored directly inside of the controller for additional compatibility. The mobile device holder arms also fold into the body of the remote for added size reduction when being stored and transported. Similar to all recently released DJI consumer drones, the Mavic Air also features dual-band frequency transmissions, with both 2.4 GHz and 5.8 Ghz frequency options that users can choose between depending on the area they are flying in.

A built-in screen is extremely helpful in the instance that your Smartphones' battery life drains while out on a shoot. The Mavic Air's remote lacks a built-in display screen, however, users can view a full display of their camera's live-feed in addition to all the flight controls directly off of their Smartphone on an extremely user-friendly interface via the DJI Go 4 App. 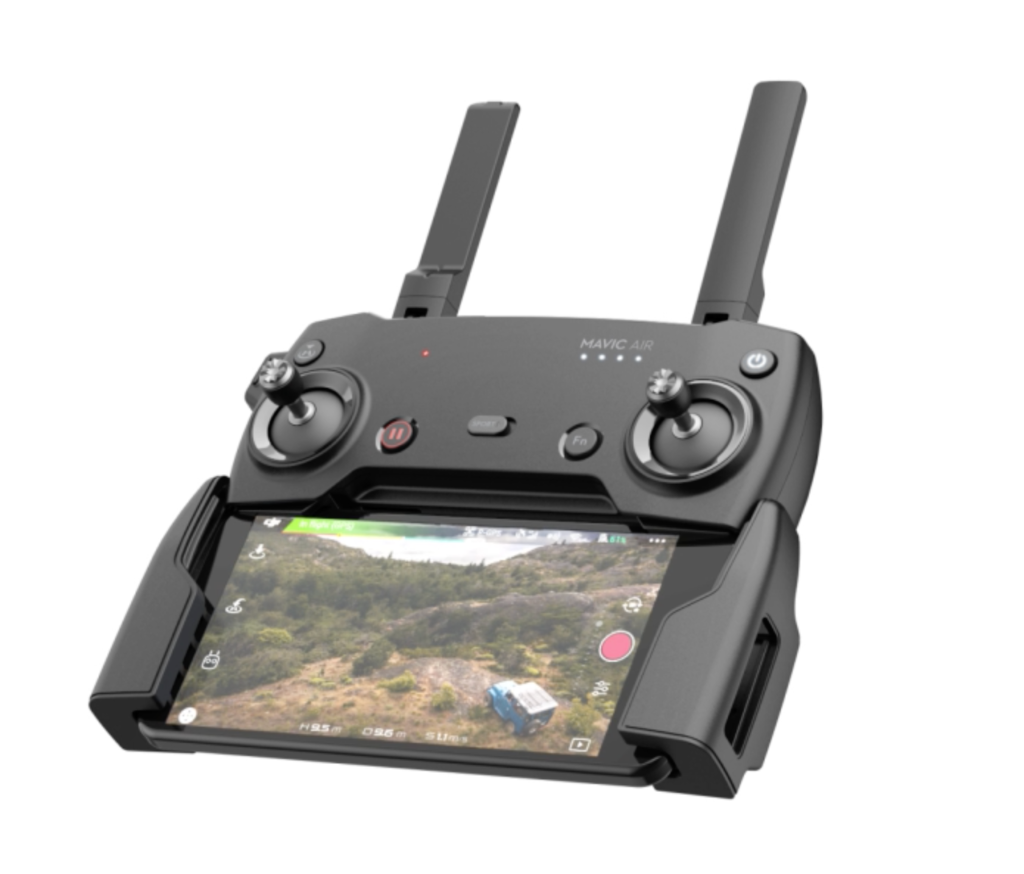 Though small in size, the Mavic Air is extremely agile, precise, and powerful in the air. According to DJI's official specs on the Mavic Air, the drone has a maximum transmission range of 4 km, and can reach an incredible maximum speed of 68 km/h. Despite its size, the Mavic Air can also withstand wind speeds of up to 38 km.In our personal experience, we have sold drones all over Canada and have noted that Nova Scotia has the poorest range out of all the provinces. When range tested, the Mavic Air was capable of reaching a maximum range of 1167 meters. The range reached was 60% of the Mavic Pro's full range, which for its size and price point exceeded our expectations.

When testing the Mavic Air's battery life, the drone could reach an impressive full 20 minutes of flight time in non-windy conditions. In higher wind conditions, the Mavic Air is still able to hold its own and remain extremely stable, and while the Mavic Pro would perform better in higher winds compared to the Air based on size alone, drone pilots are not recommended to fly in high-wind conditions in the first place. 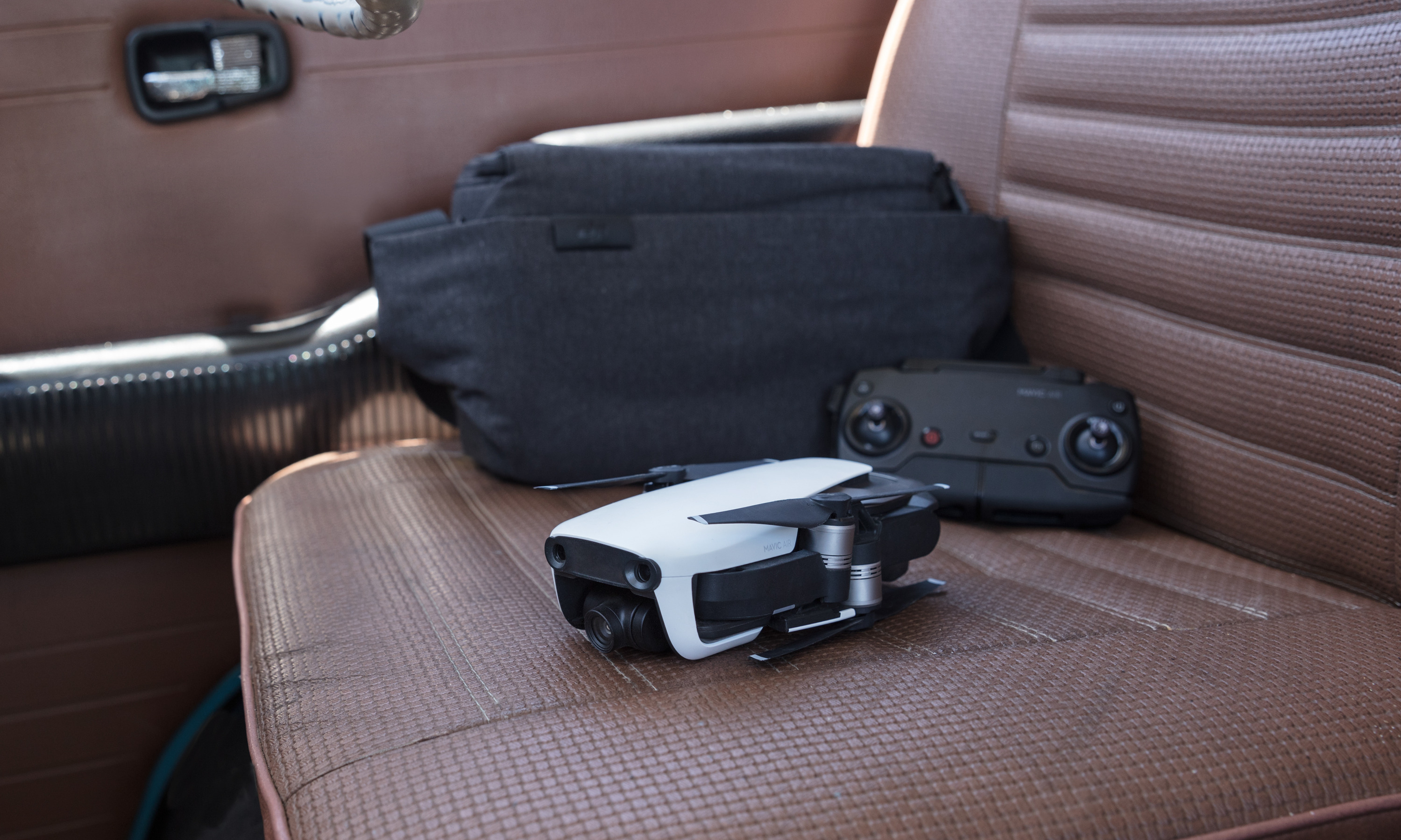 One of the worst feelings for a drone pilot is finally reaching your launch site, and realizing that you forgot your Micro SD Card at home. With the Mavic Air, this issue is thankfully solved thanks to the drones 8 GB of internal storage in addition to an onboard Micro SD Card slot. This is a great new addition featured on the Mavic Air that will especially benefit any professional photographer. With 8 GB of internal storage, drone pilots will never have to miss out or be inconvenienced in the case that they forget their Micro SD Card on a shoot again. 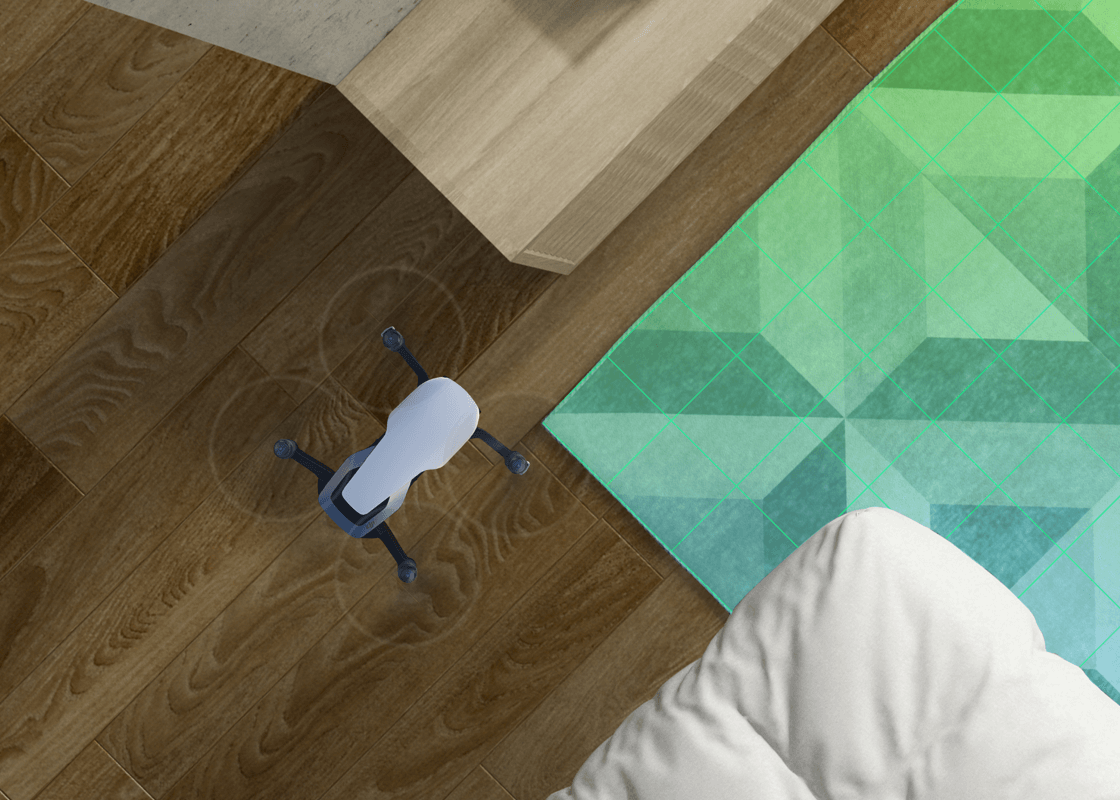 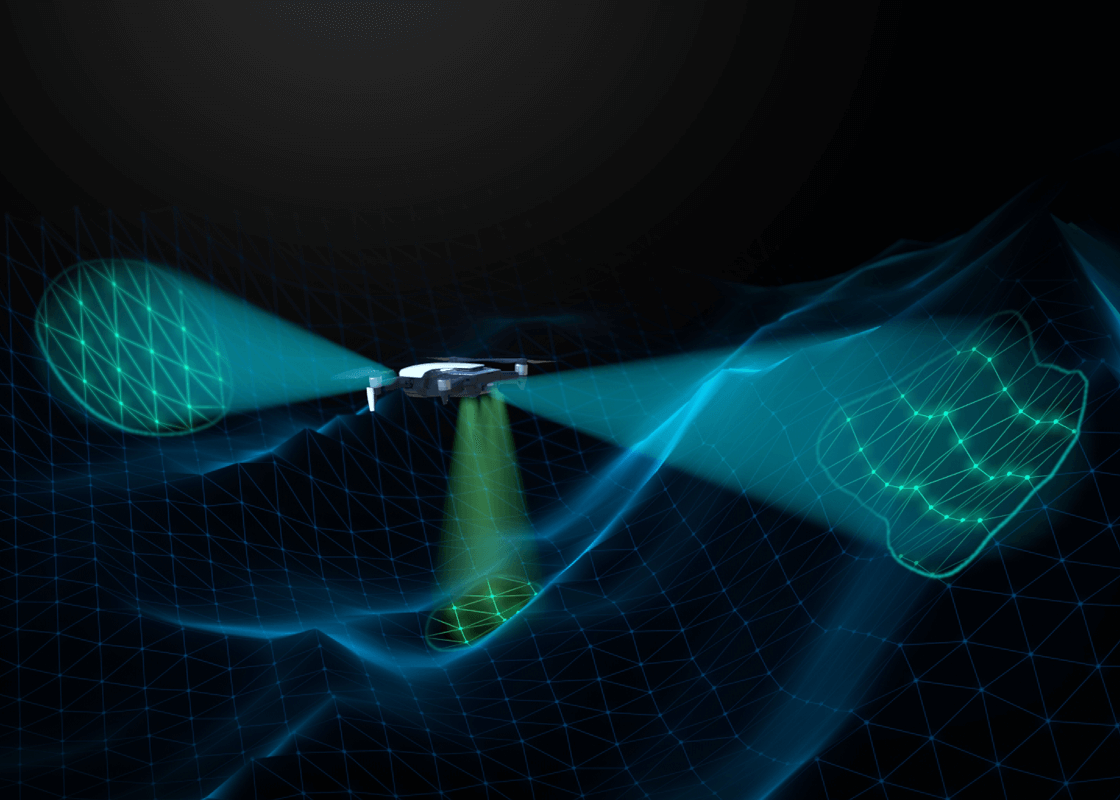 All of the most recently released consumer drones by DJI have featured front and bottom facing obstacle avoidance sensors for added safety in the air. The Mavic Air's obstacle avoidance system has received an additional upgrade and features both front, bottom, and new rear-facing sensors to further enhance the drone's overall safety in the air. The Mavic Air's new FlightAutonomy 2.0 system includes the drone's primary visual camera, bottom, forward, and rear-facing sensors, IMU redundancies, and intelligent computing cores for the most comprehensive obstacle avoidance system featured on a drone of its size.
With its fully intelligent collision avoidance and environmental sensing system, the Mavic Air is able to detect and avoid objects in the air faster and smarter than any drone before it. 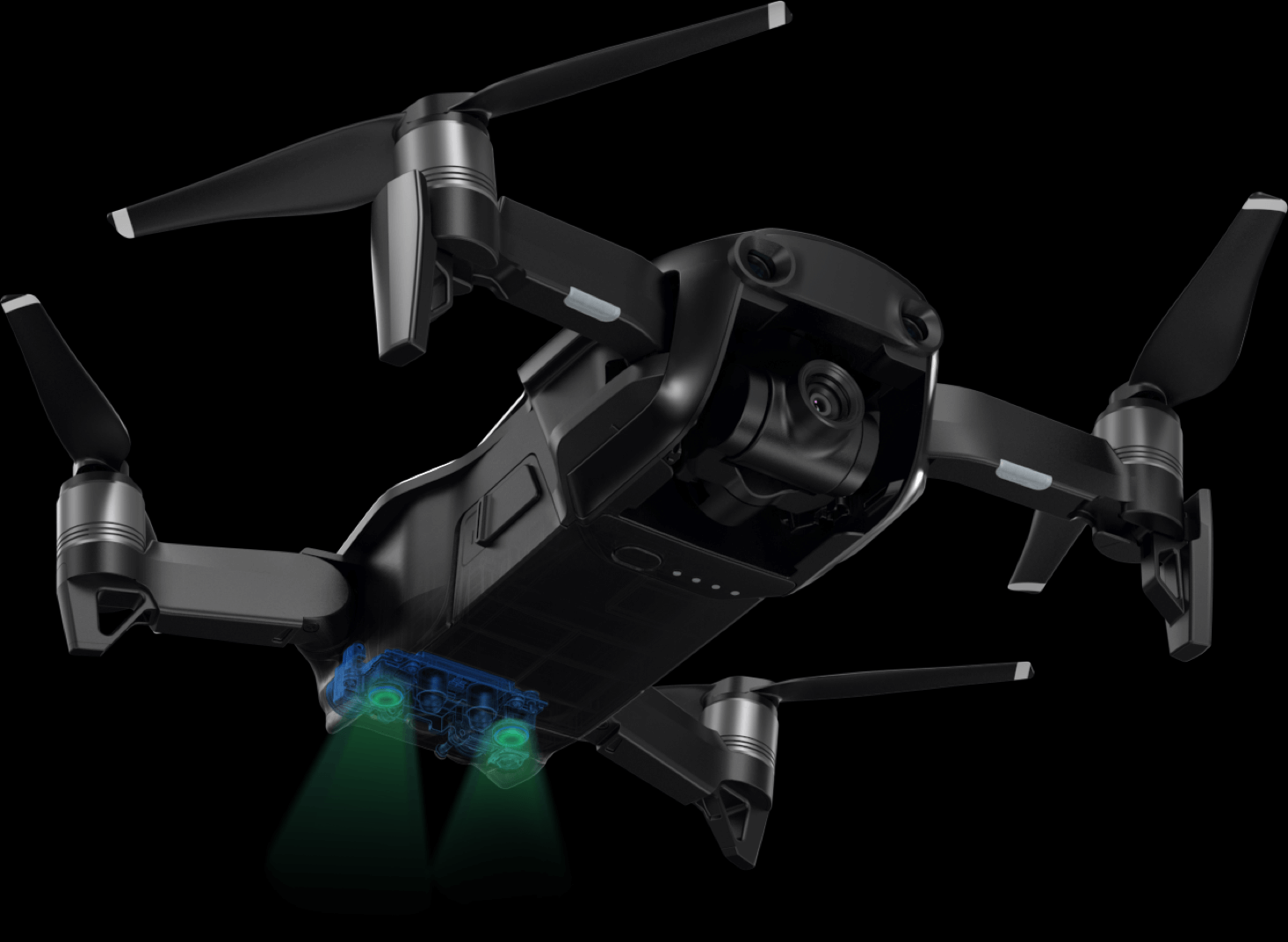 The Mavic Air's two downward-facing cameras and bottom-facing infrared sensors ensure that the drone is able to better position itself when in flight, In test flights, the Mavic Air moved extremely accurately, responding effortlessly to every movement commanded by the drone pilot. Overall, the Mavic Air's obstacle avoidance system is more responsive than any other drone we have ever flown, responding to both the users and drones controls simultaneously for optimal precision and safety in the air. 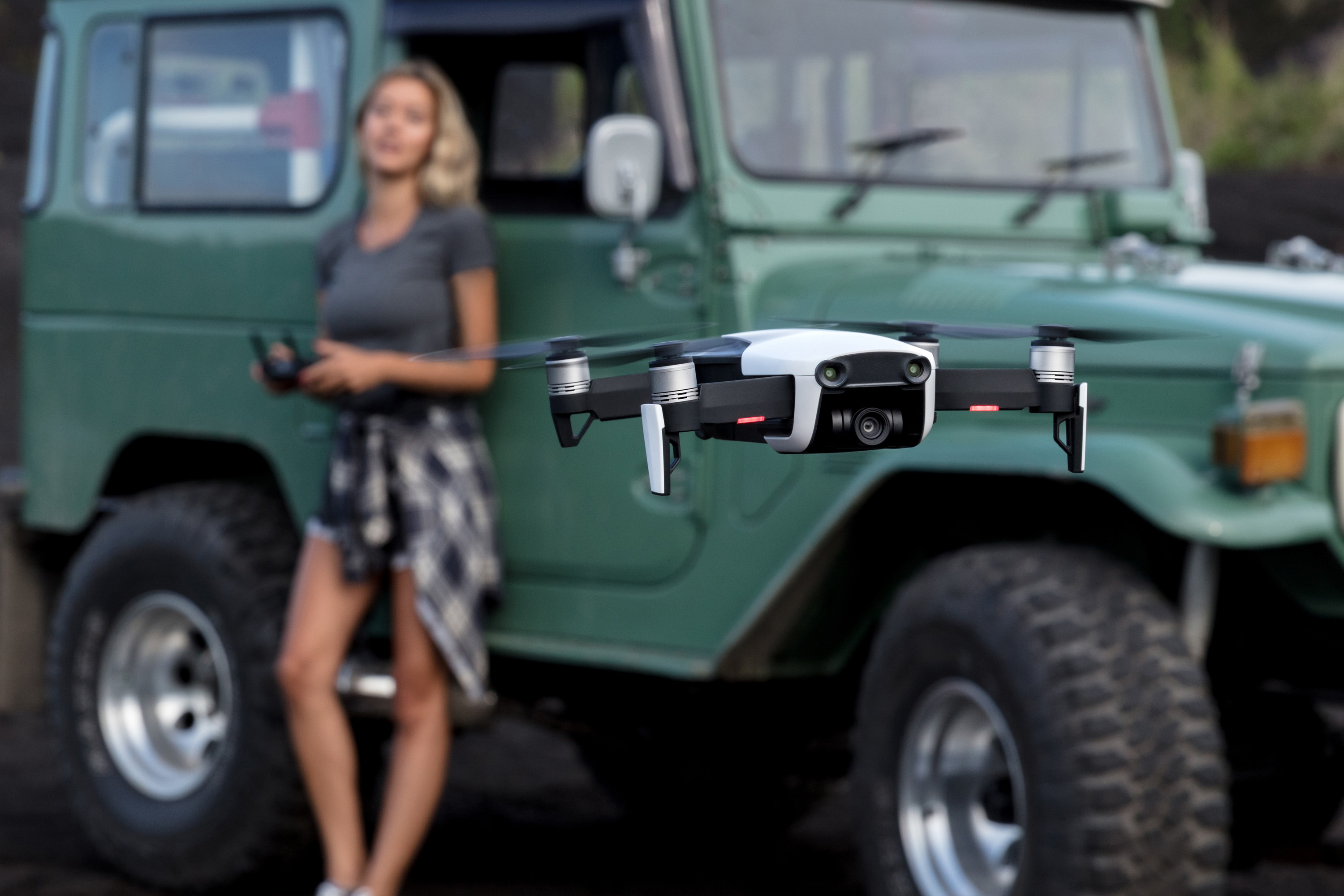 The Mavic Air ensures that any aerial footage captured is smooth and stable. The Mavic Air is the first drone of its size to come equipped with a fully stabilized 3-Axis mechanical gimbal for ultra-smooth and shake-free footage. The gimbal system is built with a triangular design as well as gimbal dampeners to reduce any vibrations or shake in the air. The 3-Axis Gimbal also features an angular vibration range that has been reduced to 0.005°.

The Mavic Air's camera itself is capable of capturing stunning and professional aerial footage that were never before possible with a drone its size. Compared to the Mavic Pro's camera, the Mavic Air's camera provides even better results due to the cameras higher bitrate and enhanced HDR algorithms. The Mavc Air can shoot 4K video at 30 fps while recording at 100 Mbps for better video quality and file size. Drone pilots can also capture stunning slow-motion video footage and record 1080p at 120 fps. With an onboard 1/2.3" CMOS sensor, the Mavic Air is capable of capturing stunning 12-megapixel stills. The camera is additionally designed with a f/2.8 lens with a 35-mm focal length of 24-mm. 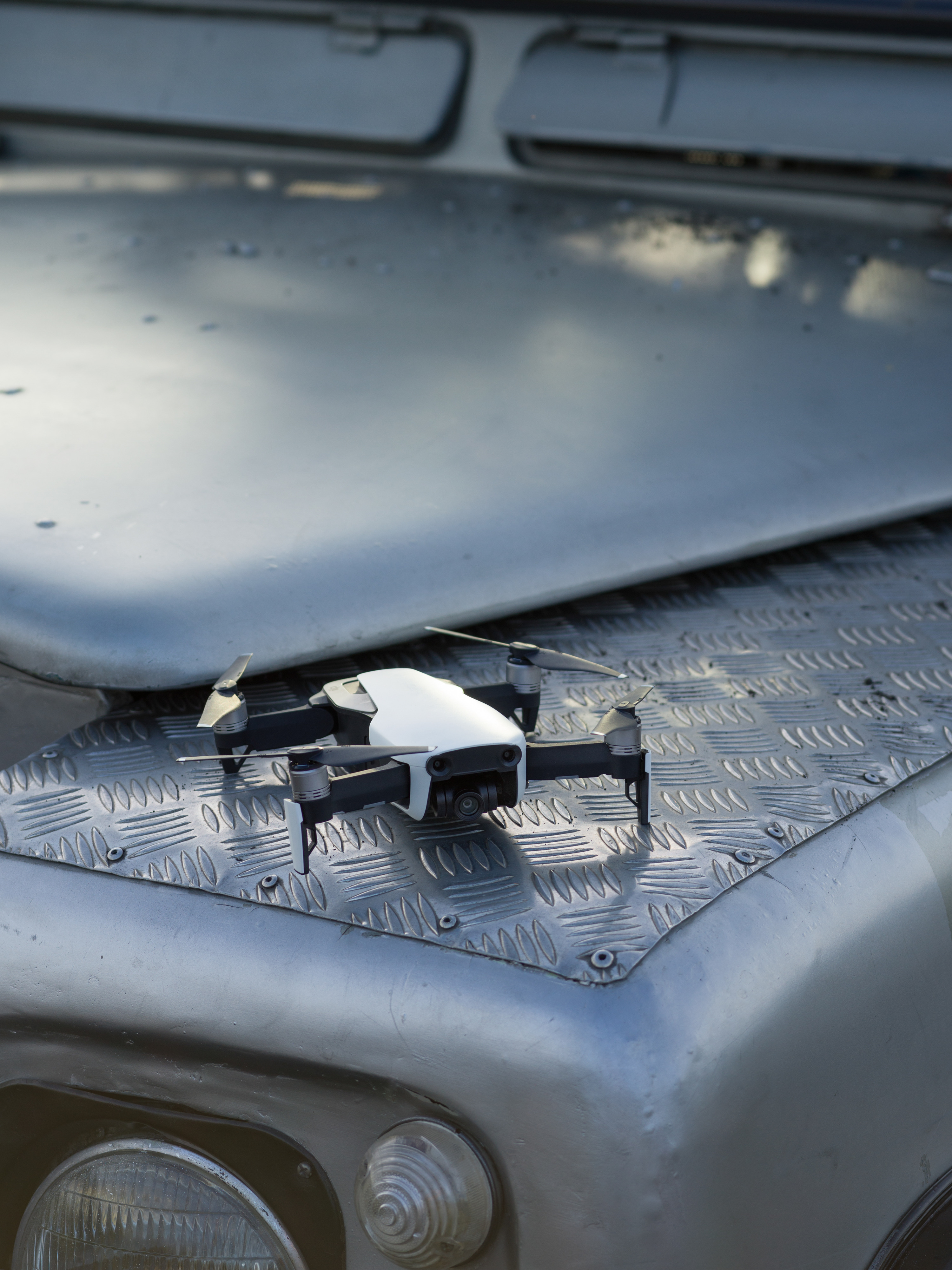 On top of the stunning camera quality, the Mavic Air provides, DJI has improved camera modes to enable users to capture the best aerial shots possible. In the new and improved Panorama Mode, the Mavic Air can capture 360° photos so that users can relive any experience in a more immersive way. With just a tap, the Mavic Air will capture and stitch together 25 photos in just 8 seconds to create 32-megapixel Sphere Panoramas. The Mavic Air can additionally shoot Horizontal, Vertical, and 180° panoramas so that any drone pilot can capture the exact shot they envision. 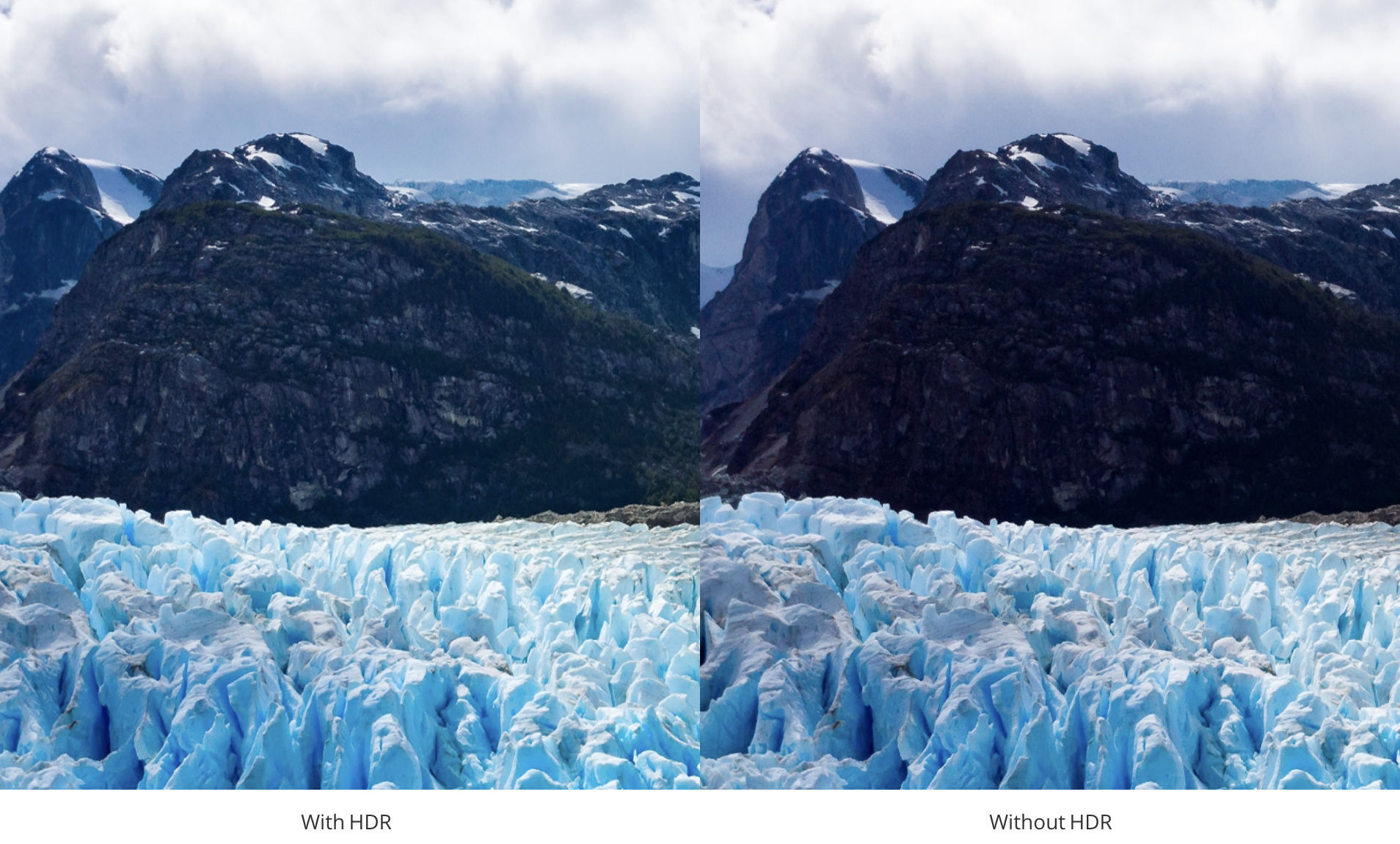 DJI has also enhanced its HDR algorithms, so that capturing the ideal exposure settings in any environment is easier than ever. Using HDR Mode, the Mavic Air can intelligently and automatically adjust its exposure settings depending on the lighting conditions of its surroundings. For first time flyers, this is a great feature to help capture any image in the best light. With HDR any dark or overexposed areas in the shot can be processed and adjusted with more natural transitions between shadows and highlights, guaranteeing perfect lighting in every shot.

The Mavic Air features DJI's signature intelligent flight modes excluding Waypoints, as well as new innovative modes including Aeseroid and Boomerang QuickShot Modes, and an improved ActiveTrack Mode that will take any users aerial creativity to all new heights.

The Mavic Air features a new and improved ActiveTrack Mode that can now track multiple objects simultaneously. With enhanced precision, the Mavic Air can now track up to 16 different subjects at once whether they are running, biking, or climbing. 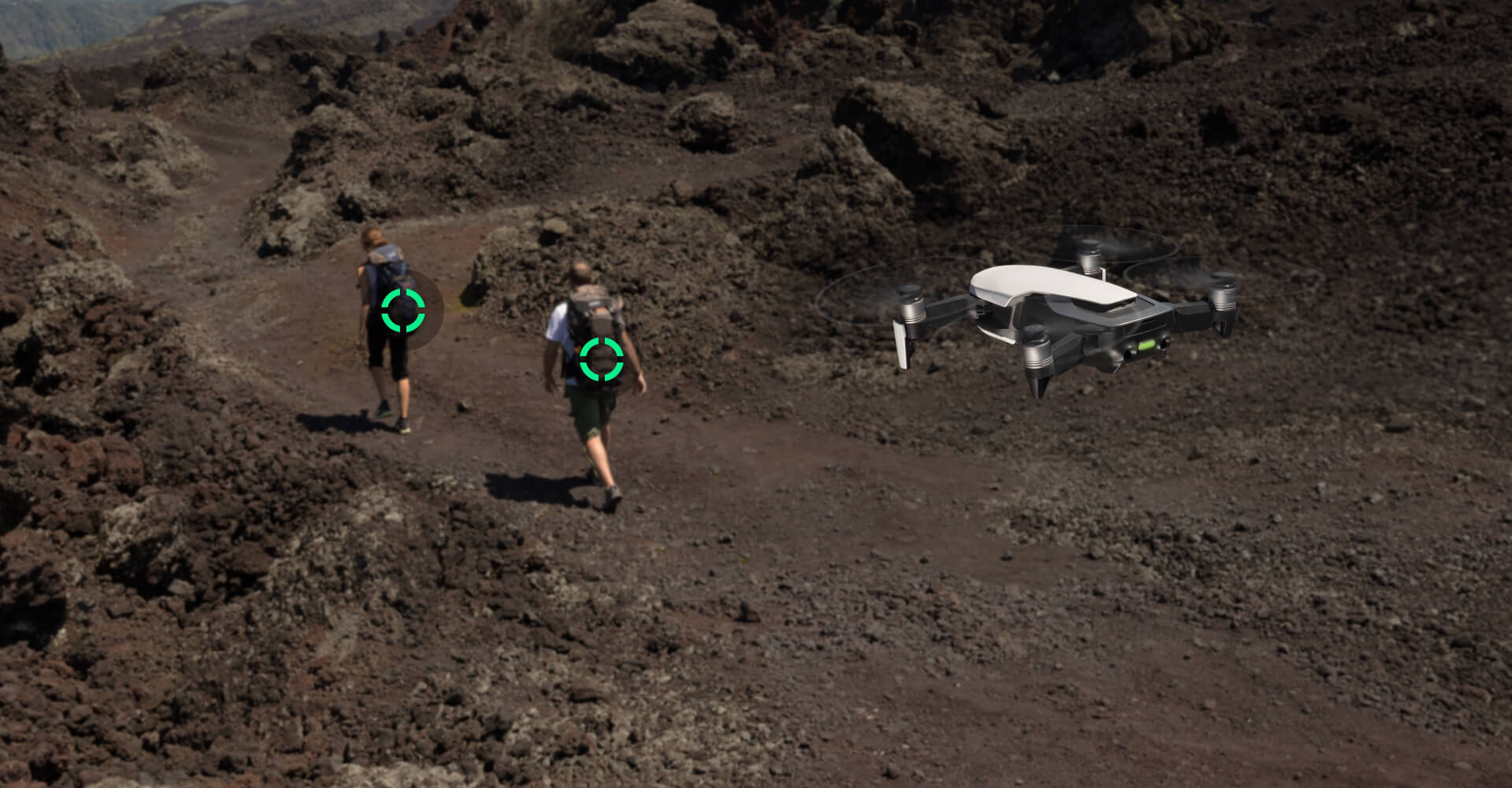 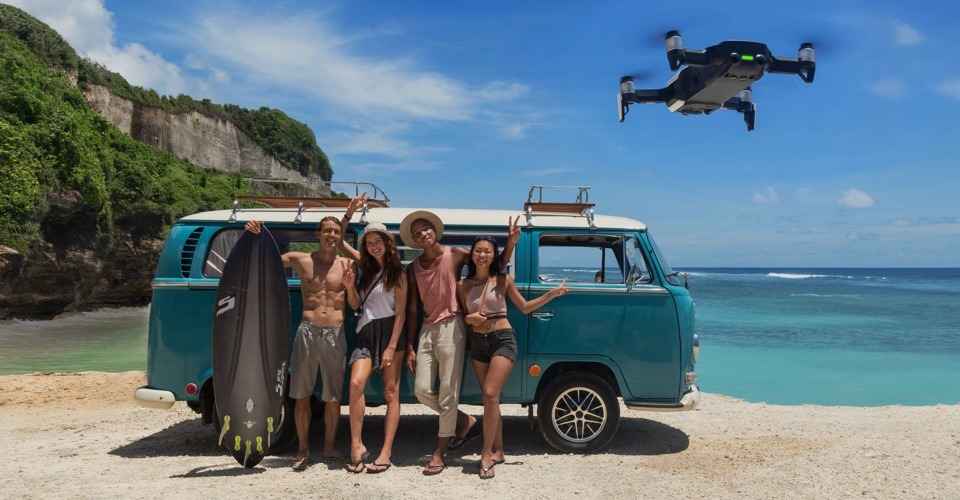 With SmartCapture, drone pilots can snap quick selfies in a fun and interactive way with just their hand gestures. Similar to the Spark, the Mavic Air can land, launch, and be controlled by the user's hand movements for effortless piloting and more creative shot options.

TapFly Mode offers users who may be new to flying an easy way to pilot their drone. By simply tapping on their Smartphones screen, drone pilots can have their drone fly in the selected direction. TapFly offers four different modes including Backward, Free, Coordinate, and Forward. 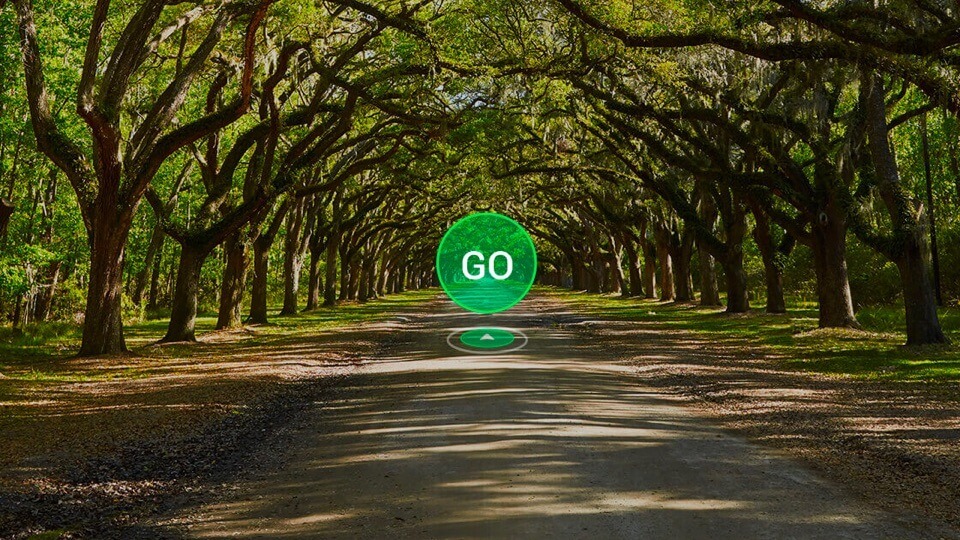 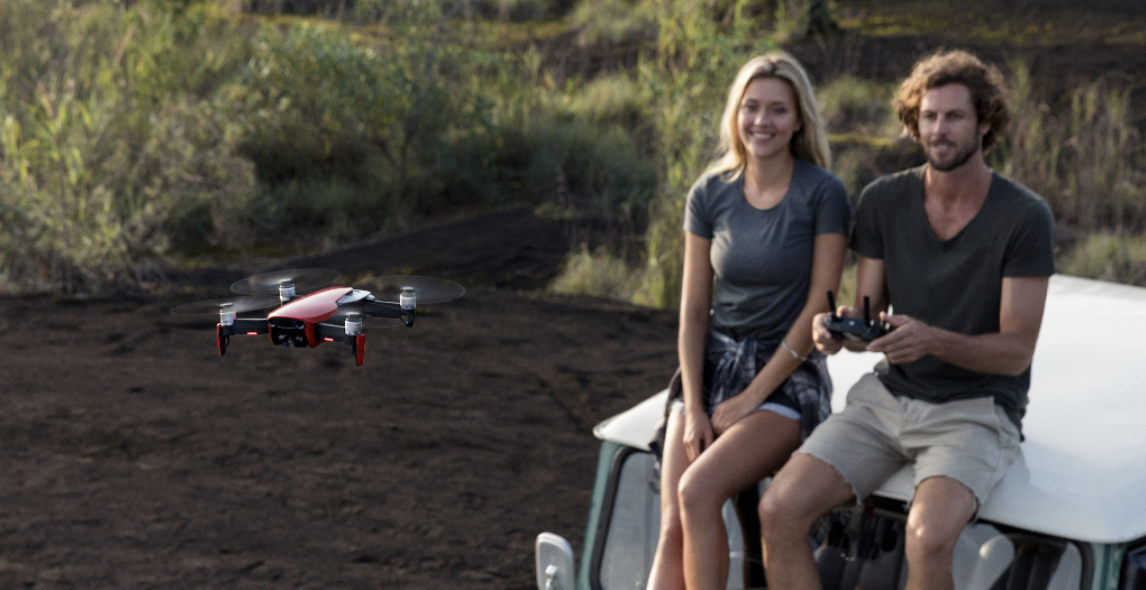 QuickShots enables any drone pilot to capture fun, dynamic shots with just a tap on their screen. The Mavic Air features Drone, Circle, Helix, and Rocket QuickShot Modes in addition to two brand new modes named Boomerang and Asteroid. Footage captured by the Mavic Air can be directly shared to any Social Media channel via the DJI Go App.

the best consumer drone yet 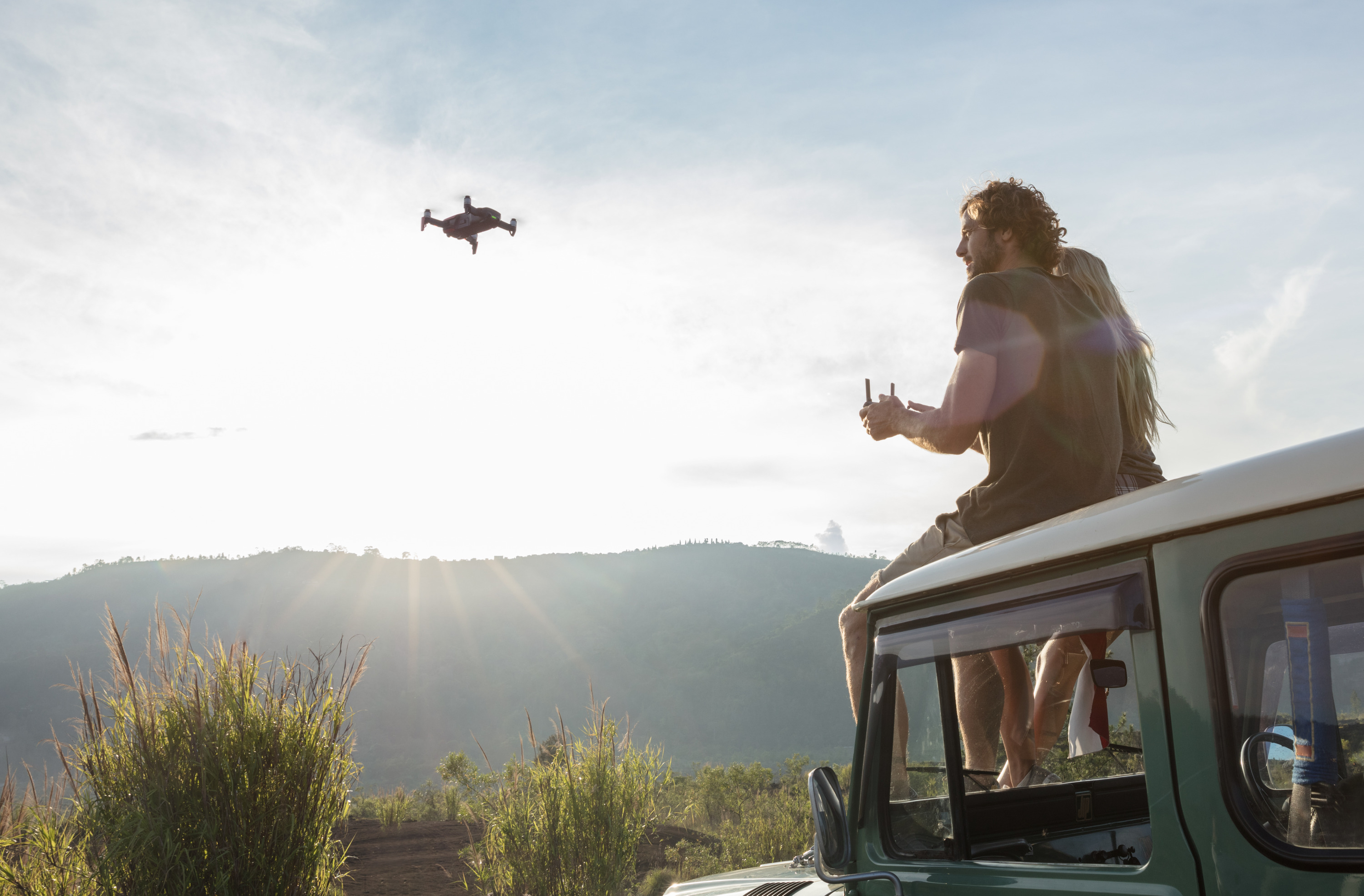 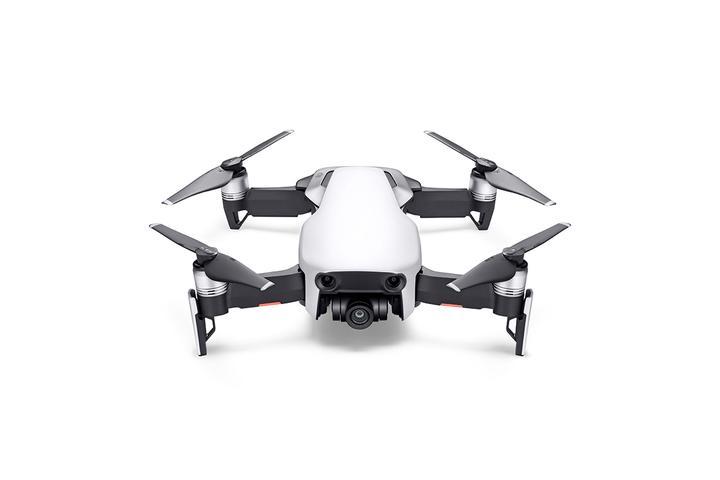 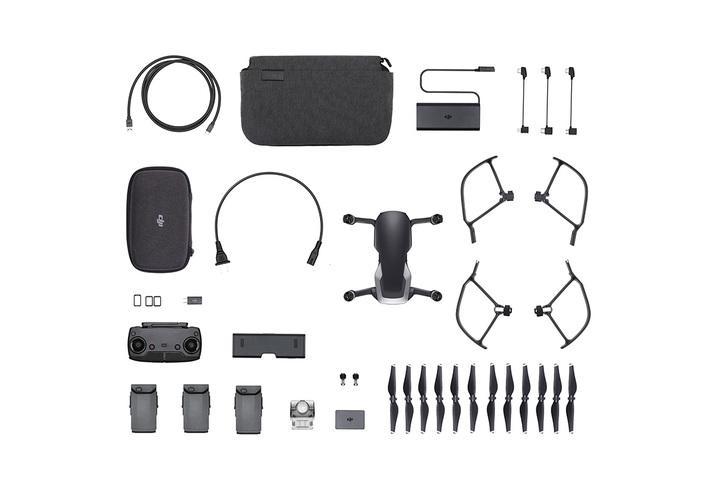